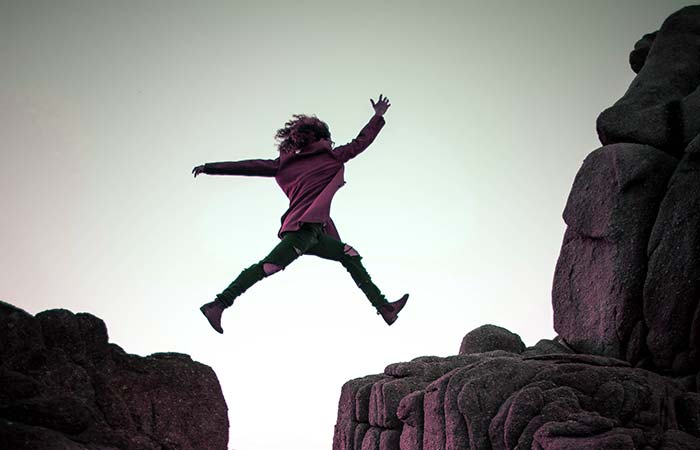 “Only those who risk going too far can find out how far they can go.”
– T.S. Eliot

I once asked a spiritual teacher a question that had been preoccupying me for months. I had read one of his books and deeply resonated with it, so when I had the chance to speak with him during a public event I said, “I’ve been reading your book over and over again, and everything I read in it feels more true to me than anything else, but where do I get the faith to give my life to that and know it will turn out OK?”

He got very focused, looked straight at me and said, “Who says it's going to turn out OK? It could end up a total mess! If you knew it was going to turn out OK, you wouldn't need any faith, would you? because you'd have a guarantee.” He paused and then added, “There are no guarantees. I'm offering you a one-way ticket; you get on this train and you never come back. And the part of you that wants a guarantee is that part that’s getting its head dragged to the chopping block.”

I heard the words and they blew my mind open because I realized that I had always thought there was a way to life safely – that I could figure out a way to live that would be guaranteed to be good in the end. Suddenly, it was so obvious that no life is inherently any less risky than any other. Every life is equally at risk. There's no guarantees in any direction. You can do what everyone thinks is the right thing. You can even do it perfectly and still it can turn out a mess. On the other hand, you can live in opposition to the norms of culture and do everything wrong and that can turn out a mess too. And anything in between can also end up a mess. There's no life that's guaranteed to be any better than any other. We just don’t know what’s going to happen.

Up to that point in my life, I'd been trying to do it right and I was really good at doing all the right things. I was 29 years old and married. I had a degree in engineering even though all I had ever wanted was to be an artist. I was making a lot of money. My wife was making a lot of money. We owned a white house with a white picket fence on a corner lot near a good school system. I had exactly the life that was supposed to make me happy, but I knew that down deep I was unfulfilled.

In that moment I realized that the road I was on wasn't going to lead to deep satisfaction, at least not for me. I decided to devote my life to what was calling most deeply to my heart and to never question it again. It had never occurred to me before that moment that I could dedicate my whole life to spiritual awakening. I had always thought that would be an important part of my life, but fundamentally, my life was about career and family. Now I was awakened to the possibility of choosing to live a spiritual life and I realized that was exactly what I wanted to do. I ended up leaving my marriage, very amicably by the way, and my career, and moving into a community where I could do spiritual practice to my heart’s content for the next twenty years.

It felt crazy, to me and almost everyone I knew, but I had to. I was determined to live a spiritual life no matter what that meant and no matter how it turned out. As an engineer I realized that I had one life to live, which meant one experiment to run. I saw that I, and almost everyone I knew, was running the try-and-get-it-right experiment, and I wanted to run a different one. I decided to live a life dedicated to spirit and never back down until the day I died. In the end, I’d see how it turned, but no matter what happened I would die knowing that I had lived a life of my own choosing according to the highest truth I heard. I offer my story to illustrate the possibility of giving your entire life and all your heart and soul to spiritual pursuit.

There is no life that's inherently any less risky than any other. We never know how things are going to turn out no matter how hard we try. My spiritual community collapsed after I’d been involved for twenty years, but my experiment will continue until the day die. We are very culturally conditioned into a value set where things like status, power, wealth, and pleasure are assumed to be important. When we consider the possibility of living a spiritual life it doesn't seem to stack up well to those cultural values, but I’m profoundly inspired to share the possibility of living a truly spiritual life and I want to explain exactly why that is.

We live in a largely secular world which means there is very little belief in the existence of God, or any higher power. We’re taught that we live in a material universe full of random events. We’re trained to be good people busy forwarding our own agendas and generating achievement and success and at the same time, there is a nagging sense of emptiness that many of us can’t escape. No matter how hard we try, we keep bumping up against places where we ask, “What am I achieving all this for? I’m just going to die in the end anyway.” But our conditioning is so strong that these moments of existential angst become just bumps in the road. We tend to jump into the next round of achievement again quickly before the question burns too deeply in our soul.

Our culture would like us to believe, that the safest thing to do is what everybody else is doing, only because everyone else is doing it. After all, everybody can't be wrong, can they? I want to inspire you to consider living a different kind of life, one that is guided by a direct connection with the ultimate source of existence. It is possible, through practice and surrender, to open to sacred wisdom and true love, and live a life that is bountiful, creative, and celebratory.