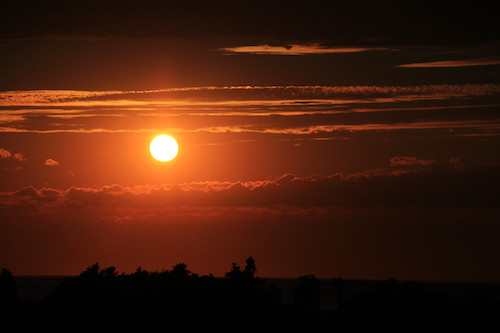 My work is focused on creating the conditions for collective awakening into what could be called Meta-Being. In this essay I will explain what I mean by that as specifically as I can.

First of all I want to acknowledge that I came across the term Meta-Being in the writing of the feminist theologian Mary Daly who used it in opposition to the term New Being that had been coined by the theologian Paul Tillich. Daly preferred Meta-Being because it didn’t imply a break with the past but rather a more encompassing form of being that included what came before.

For twenty years I lived in an experimental spiritual community focused on what we were calling collective or inter-subjective awakening. In the year 2001 I had the good fortune to be present for a particularly dramatic example of this kind of collective emergence and the best way for me to explain the phenomenon is simply to tell you what happened.

I was part of a small group of people on a two-month long retreat that included focused discussions every evening. It was in these discussions that something profound started to be expressed by some of the members of the group.

During one of these meetings I experienced a shift in identity that has defined my life ever since. At one point in the meeting I felt deeply inspired to speak and started to think about what I would say. Then I stopped and rather than formulate my words beforehand I simply allowed them to rise up and pass through my mouth.

I found myself speaking words before I knew what I was saying. It felt like something was speaking through me and describing my experience more precisely than I ever could. So on the one hand it felt like I wasn’t speaking at all, and yet the words being spoken were more mine than any I had ever spoken before. These evening meetings continued and more and more of us entered into this mysterious space of engaged surrender.

Once everyone in the group had entered into this shared awakening a wild energy swirled through us and everyone was speaking with a profound clarity, conviction and sensitivity beyond anything they had experienced before. We all seemed to have access to what I would now call Meta-Being – a source of wisdom that encompassed all of us and gave us access to possibilities beyond our imagination.

From that time forward I dedicated myself to discovering how to create the conditions that allow Meta-Being to be awakened and sustained between people. I have worked with many people in many different ways and I am as inspired by this work today as I ever was.

One of the things that I have learned about the process of collective emergence is that it depends on our willingness to liberate ourselves from our current sense of identity so that we are available for something more. We have all learned to think of ourselves as an isolated entity – a separate thing in a universe filled with other things. Unless we see through this assumption of independent existence, at least to some degree, a new form of self cannot reveal itself.

As we let go of the false beliefs and assumptions that hold our current identity of separation and isolation in place we discover that the person we think we are is nothing more than a collection of stories about ourselves. Underneath all those stories there is no ‘me’ that is not just another story about ‘me.’

This is the great realization of emptiness that is talked about in many of the world’s great spiritual traditions. It shows us that our current self sense is not immutable – it can change. We can grow into a different sense of self – not just the same self with better qualities, but something dramatically different. We can become a different kind of human.

As we move further and further away from the stories about us and deeper and deeper into the direct experience of being we enter a profoundly free and fluid state of awareness. From here we can discover together how to expand into a sense of self bigger than we ever imagined and at the same time find our True Self.

When we engage together in the collective awakening of Meta-Being we are embracing the future of being human.

I too sense a growing anticipation toward the potential for collective emergence at Pendel Hill. First of all the location, is embued with decades of peaceful loving energy, add to the geomatics of location ~ your experience, and guidance, and I am sure the willingness of all who will be present … this ‘is’ a gathering for all breakthrough evolutionary pioneers! I have been reading your book while floating in a little row boat up on Big Basswood Lake. So far it has exceeded my expectations, which were pretty high! Blessings to you, Jeff and all who will be coming… Read more »

This sounds so exciting! I am looking forward to “letting go” of the many ways in which I continue to cling to false illusions about myself and others.

this is a quest i’m immersing for five years ago. the discoveries i made about myself, and others, the way i changed and knowing there’s so much more to discover is bringing me a lot of joy.