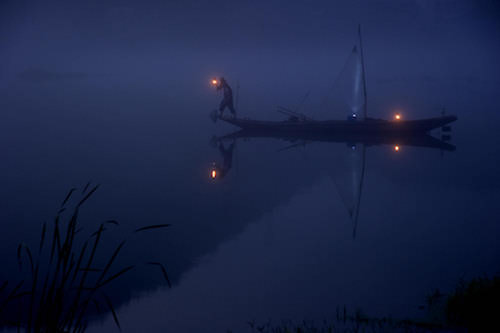 A mystic is one who sees the deeper reality that lies hidden beneath our ordinary experience of reality. The mystic looks deeply into the nature of things by letting go of conventional wisdom and allowing their awareness to roam beyond the safety of the familiar. The mystic has tasted something that lies under the surface of things and the ordinary forms of reality alone are no longer satisfying.

The mind of the western world was never the same after Immanuel Kant wrote his brilliant these explaining how we never experience reality as it is. Instead we experience reality as it comes to us filtered through the mind and constructed into an intelligible form. As it passes through the mechanisms of understanding, reality becomes known to us, being categorized, labeled, discerned, and organized. Our perception of reality Kant called the phenomenon. And the phenomenon is all we can ever know. The deeper reality from which the phenomenal world is built remains ever unseen and invisible to us.

The mystic believes differently. The mystic is captivated by the eternal quest to see that which cannot be seen and asserts that it is possible, if we let go of what we think we know, and allow ourselves to enter into the dangerous waters of radical uncertain. The Cloud of Unknowing is a classic text of medieval Christian Mysticism. It taught the art of forgetting what is known as an act of surrender to deeper mystical truths.

William James in The Varieties of Religious Experience identified four characteristics that all mystical experiences share – ineffability, noetic quality, transiency and passivity. Mystical experiences are ineffable because they defy description. Those that have them find themselves at a loss to adequately describe their experience to others. They have a noetic quality, because although they cannot be described or understood, there does seem to be an intuited knowing inherent in them. They are transient and fleeting in nature. They arrive unexpectedly and depart in their own time. They only show themselves in the face of surrender. You cannot will a mystical experience into being. You may do a great amount of practice and study to coax them out, but in the end you must allow them to come into being, not force them to. A few years after William James identified these characteristics the great Christian mystic Evelyn Underhill described mysticism in her great book of the same name.

In mysticism that love of truth which we saw as the beginning of all philosophy leaves the merely intellectual sphere, and takes on the assured aspect of a personal passion. Where the philosopher guesses and argues, the mystic lives and looks; and speaks, consequently, the disconcerting language of first-hand experience, not the neat dialectic of the schools. Hence whilst the Absolute of the metaphysicians remains a diagram —impersonal and unattainable—the Absolute of the mystics is lovable, attainable, alive.

If we look for roots of secular mysticism in the modern west, of the figures that must be considered is Samuel Taylor Coleridge. His philosophical masterpiece Aides to Reflection proved to be a profoundly inventive interpretation of Immanuel Kant’s writings. Coleridge found in Kant a distinction between reason and understanding. Reason was an intuitive knowing that possessed the noetic quality described by William James. According to Coleridge mystics trust their deep intuitions (of which mankind at large is not conscious) about reality, and accepted them as evidences of the truth of any opinion.

Ralph Waldo Emerson picked up the distinction between understanding and reason from Coleridge and introduced it into the American mind. Reason was the self-evident knowing of things that is obtained directly through our initially perceived awareness prior to understanding. Understanding comes next and is the knowing-about-things that is derived through rational logic and contained in explanations, interpretations and cognitions. For Emerson intuition became the highest source of knowledge.

If we consider what persons have stimulated and profited us, we shall perceive the superiority of the spontaneous or intuitive principle over the arithmetical or logical. The first contains the second, but virtual and latent…Logic is the procession or proportionate unfolding of the intuition; but its virtue is as silent method; the moment it would appear as propositions and have a separate value it is worthless.

Mysticism has long been identified as a direct knowing of inner truths that are hidden and ordinarily remain unseen. These inner truths contain a form of wisdom about the nature of reality that can only be obtained as inner revelation.

Ordinary science proceeds by focusing attention outwardly and attempting to stand apart from the world to find real understanding. The mystical scientist looks inward and discovers in the intuitions of the spirit deep wisdom about the world outside.

Thank you Jeff but I am also wondering about mysticism in other faiths or religions. I also think that practice lays the ground work for possible mystical experiences like tilling the garden. Enjoy your post.marcia perryman

And thank goodness for the philosophers who ‘ guess and argue’ (Evelyn Underhill), because they are our bridges who describe and discuss the ‘knowing’ which is discovered by Mystics.
Thank you so much Jeff. I will read this again and again.

Reblogged this on Lavender Turquois.

Ah Jeff, here you speak to my heart- those moments when the Divine has revealed Itself to me in a manner that is more true, alive and illuminanescent than we can ordinarily experience or explain it! Thank you.

Thank you Jill….my heart sings with yours in the revelation of the divine.